Apologies in my lapse in road trip posts, as it has been a crazy month, not only driving cross country but settling back down in Albuquerque. However, we will resume my road trip with Gaza Korean Grill in West Lafayette, IN. (If you did not read my previous DC-Denver/Denver-San Diego road trip article, please see my posts on East Pearl in Rockville, MD and Everyday Noodles in Pittsburgh, PA)

The third leg of my road trip brought me to West Lafayette, IN, where I was staying with a friend for the night. Since my friend had never experienced eating Korean BBQ, but mentioned that there were several good Korean places in town, we decided to go eat at Gaza. Gaza had a bonus in that it was the only place in West Lafayette that had all-you-can-eat (AYCE) Korean BBQ. I didn’t know how much I’d be able to eat that night, but I was groomed to believe that AYCE was the ONLY way to eat Korean BBQ.

We entered the restaurant about 9PM, which was 30 minutes before their closing time though we had thought the restaurant closed at 10PM. The server politely seated us, but definitely rushed to place our order. We ordered the “Unlimited Set A” which came with 2 orders of beef, one order or pork, and one order of chicken. Since they were near closing they ran out of some marinated beef so we substituted with thin beef strips. 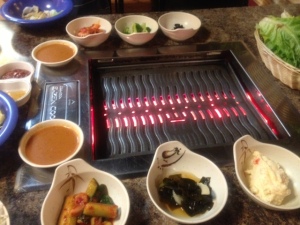 After we ordered, the banchan came to our table, and they were plentiful. The banchan included napa cabbage kimchi, cucumber kimchi, steamed marinated broccoli, potato salad, seaweed salad, marinated beans, and our individual salads with sesame dressing. All of the banchan were pretty good and comparable to what I would find in Southern California. 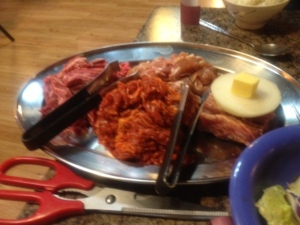 The cuts of meat came to our table about 5-10 minutes later, when our grill was heated up and buttered. We first grilled the large piece of galbi and the tiny strips of beef. Both my friend and I agreed that each cut was really good and well seasoned. I almost felt as if I were in Garden Grove. However, the pork and chicken were not as great. The chicken was marinated oddly and neither of us could tell quite what bothered us about the chicken. As to the pork, I liked it but my friend didn’t. However, for full disclosure my friend doesn’t really like pork much to begin with. Despite the pork and chicken dishes being underwhelming, we still had a very flavorful and full meal given that there was plenty of beef and banchan to eat. In fact, we could not finish their first plate of AYCE meat.

In terms of service, the servers and owner were fairly polite though they did seem a bit rushed to also get us eating and out the door. They refilled our waters very promptly, took away plates in a timely mannered, and did a couple of courtesy asks to see how we were doing. They did, however, presented us with the check before we were done eating, but that is partially our fault for coming into the establishment so late.

The killer, however, was the bill. It cost us each around $30, plus tax and tip, which was certainly steep given that some old menus online stated somewhere more around $15/person and I had not been used to paying more than $22/person for AYCE Korean BBQ. I certainly think the experience was still worth it, given the quality of the beef items and the banchan, but it was a sticker shock to both of us young professionals. All in all, it is definitely a nice place to eat good Korean food in West Lafayette, but I would probably stick to ordering a la carte.

Today I am taking a slight detour from my coast to coast road trip in honor of my move to Albuquerque. As some of my readers already know, over the past 2-3 weeks I have posted less regularly not only because of my roadtrip, but because I accepted a new job in Albuquerque. While Albuquerque does not have the variety that Southern California or even Denver has in terms of Asian restaurants, there are certainly gems to be found.

My first Albuquerque Asian restaurant is Street Food Asia. Now, for full disclosure I do know the chef/owner of the restaurant and he and I have a good rapport from my previous time living here. However, I am writing this review as accurate as possible based on my meal earlier today trying to be fair and unbiased as possible.

When I entered Street Food Asia this afternoon for lunch, I was promptly greeted and seated. Unlike some restaurants that insist on single guest patrons to sit at the bar or grab a small corner table, Street Food Asia is very welcoming and generous to allow single guest patrons to sit at any 2 person table in the restaurant. I truly appreciate that service, given that some times I do want a nice table to eat food by myself.

As I sat down, I browsed their rather voluminous menu. Since I did want some stir fried noodles I opted for the Malaysian style chow fun (chow fun are the wide, flat rice noodles that are commonly found in Cantonese cuisine). Additionally, I ordered some chicken spring/egg rolls to add an item and compliment my dish. The chow fun was great, with a nice flavor that was not too spicy and filled with fresh mushroom and Chinese broccoli. The noodles were also evenly stirred and not overly sauced, showing good wok skills. The spring/egg rolls were good as well, if a bit large compared to traditional Vietnamese egg rolls. They had a nice filling of chicken, shredded carrots, and cellophane noodles with a wrapper that was not too crispy and thin enough to enjoy the filling.

Although the food was good, the service was not as great as I remembered. The waitress, who may be new as I was not familiar with her, seemed a bit pushy as she didn’t really give me much time to look at the rather large menu before she asked me to order. Also, the main entree came before the appetizer, which typically should not happen. However, my water was regularly refilled and while my waitress seemed a little pushy, she was congenial otherwise.

I’ll likely stick to going to dinner here rather than lunch, given that the servers tend to be a little more experienced and rather nice. However, regardless of the time of day, Street Food Asia serves some great food. Given that the owner/chef has immense experience in Cantonese and Asian food, I would expect no less. Hopefully his new fast casual concept, Street Food Market, will be just as good.