Two weeks ago I needed a quick, cheap lunch to fill me that was close to the mall. Since I have been to both Pho Nguyen and Kim Long, I decided to go to the third, and last, Vietnamese restaurant in the area: Viet Taste.

I entered the restaurant at about 2:30 in the afternoon and was ready to eat. Since it was blistering hot outside, I skipped over the pho options and headed straight for the Com Tam (Broken Rice) plates. After taking a quick look, I decided to order the rice plate with pork chop and pork skin.

After about 10-15 minutes, my food came out and something immediately struck me: this was no ordinary Vietnamese grilled pork chop. Normally Vietnamese grilled pork chops I’m used to are thinner with a rich, dark brown marinade. Instead, it came out dark red, similar to Cantonese style char siu (barbeque pork). Intrigued and hungry, I sliced away and the barbeque turned out to be pretty good and similar to a very lightly roasted char siu. The pork chop wasn’t rich in flavors from the sauce, but the meat with slight coloring, caramelization, and flavoring of the skin gave it a light, but good flavor. It was just slightly overcooked, but all in all not bad. It didn’t hurt that there was a lot of meat in the pork chop too. The pork skins were pretty good and less salty than usual, which I liked. The fish sauce could have been a little stronger, but all in all it cut through the dryness of the pork skin and the density of the pork chop very well.

Service was great as well, despite the unusually busy dining room on a Sunday mid-afternoon. Ice water glasses came out fast and were refilled very frequently.

As a bonus to this dining experience, I overheard a conversation at the next table over where two non-Asian parents told their child to eat the slice of daikon on their plate. The parents described daikon as “white carrot” which I found amusingly appropriate, given that carrots are “red daikon” in Cantonese. Viet Taste may not be the best Vietnamese restaurant in Albuquerque, but it’s a solid contender with some of the most delightfully interesting conversations in town.

It’s been a year since I started writing on this blog, so I wanted to do something a little different to mark this anniversary of sorts. I initially wanted to write about my favorite 5 or 10 Chinese restaurants in San Diego, then felt that not only would the audience be a little limited, but also that my absence from San Diego means I need to review and eat at a little more places before being more definitive.

Instead, I figured I would do a reflection of sorts – my favorite 5 places that I have written about in the last year and the 5 places that I really want to go eat at write about in the next year. While most of the picks will be based on the food, some will be based on the experience at the moment and the impact it had on me. The list is in order by state name, then city name, then restaurant name, so there’s really no ranking and the list really should not be perceived as such (I can write about why I try not to “rank” or place “stars” on my reviews at a latter date). So without further ado, my favorite five:

Reason(s): Sea Harbour has absolutely divine dim sum. My sister and I both loved the items at the restaurant regardless of whether they are “old standbys” or “new items/twists on new classics”. As it stands right now, it is still my favorite restaurant for Dim Sum.

Pro(s): Not only is the food good, the service is great as well. Items one should absolutely order here include the daikon cakes and the small plate of stir fried string beans. The decor is more upscale than even fairly nice Cantonese seafood restaurants, without being tacky.

Reason(s): It was good quality Korean BBQ and I had fun introducing a friend to the wonders of All You Can Eat Korean BBQ. It’s also the only non-Chinese restaurant on this list makes me realize the need to review more Korean and Japanese places (which there aren’t a lot in Albuquerque).

Con(s): The proportion of meat was probably better for 4 people. However, if we’re really nitpicking that there was too much meat at an AYCE Korean BBQ place, it means the restaurant has done its job well.

Reason(s): It was the last meal I had with my cousin Charita, and a good one at that. I always love a good Cantonese style Chinese banquet and Pearl did not disappoint with good execution.

Pro(s): Delicious lobster and freshly steamed lived fish (with a sauce/marinade that all my cousins salivated over). The chicken with ham as well as the roast pork were mouthwatering and well executed. The service was very friendly and efficient.

Con(s): The servers seemed to be rushing the dishes over, creating a dance of overpiled plates of food on a cramped lazy susan. The abalone and mustard green combination was a bit overdone, and I gathered that I was the only one at my table that actually liked it (despite it being one of the most expensive dishes in the banquet). The servers didn’t comprehend us well, in English or Chinese. 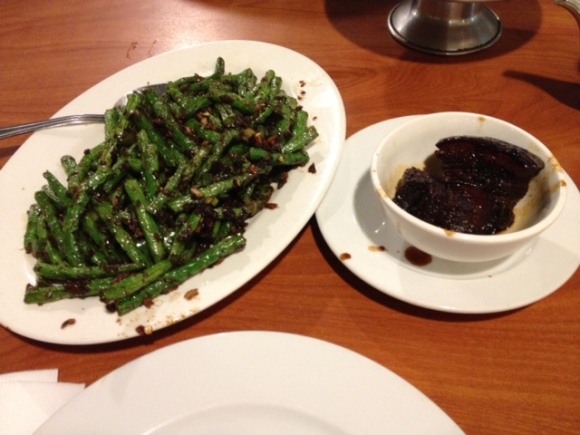 Reason(s): Homestyle Cantonese/Fujianese style food that is decently done and providing me a good taste of home in Albuquerque. In fact, the discovery of Chopstix has made me become a regular and allowed me to have old favorites like “Ants Climbing Up A Tree” (which is really mung bean noodle stir fried with ground pork).

Pro(s): Decently stir fried string beans and minced pork, similarly to how my mom used to make it. Teapots were filled with actual tea and floral leaves (for chrysanthemum tea). Bargain lunch specials (not reviewed, but I have since been a regular customer at lunch).

Con(s): Ho hum Americanized Chinese dishes on the menu. On busy nights the wait staff can be overwhelmed, though they are pretty friendly. 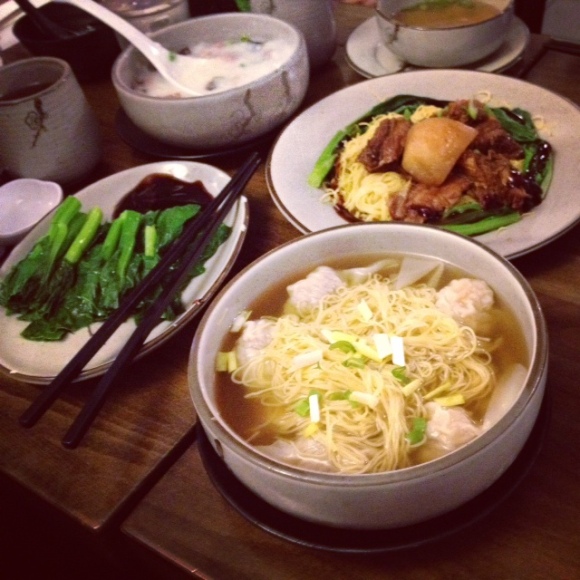 Reason(s): The lunch I reviewed was a perfect combination of a great time with family while eating classic Cantonese comfort food as it should be.

Pro(s): Nearly everything I have tried here is well executed and seems deceptively simple. I would recommend ordering the wonton noodle soup, any type of Hong Kong style lo mein, and blanched vegetables. The decor is nice too, especially for Manhattan Chinatown. The prices are very reasonable.

Con(s): On an earlier visit some friends and I tried pumpkin congee, and while the cook staff tried, it didn’t really mesh well. There could have been more toppings/filling for what’s a moderately expensive clay pot rice and the soup dumplings could have had better wrappers.

Looking forward to the next year, there are a number of restaurants I would love to write about. Here are just five of my top restaurants I’m eagerly awaiting to eat at. Fortunately, current travel plans mean that they should be on this blog soon!

Kirin Restaurant (Richmond, BC) – Considering that Vancouver has some of the best Chinese food outside of China, I’d be foolish not to experience one of their most highly rated Cantonese seafood restaurants.

Sun Sui Wah (Richmond, BC) – Rivaling Kirin (and the Richmond branch of Sea Harbour) is Sun Sui Wah that has even been mentioned in the New York Times of top restaurants around Vancouver.

Kaya (Irvine, CA) – I love Korean BBQ as much as anyone, but there’s something more comforting about soondobu and bibimbap. Bonus, it’s rated by OC Weekly as the best Korean restaurant in Orange County

Jai Yun (San Francisco, CA) – I’ve always been piqued by the chef’s omakase-ish style of non-Cantonese Chinese plates and listed as one of the best Chinese restaurants in America.

Pho Nguyen Hue (Westminster, CA) – Yes, I have been here many times and it is consistently my favorite pho place in an area with one of the largest Vietnamese populations outside of Vietnam. However, I’ve never written about it!

Of course, there are many, many other restaurants I want to eat at and write about, including some on the East Coast (Ivan Ramen) and consistent West Coast classics (Sushi Ota). Hopefully in the next year I will take a trip to Hong Kong as well. Here’s to another year of great food and writing!

I opted for the latter because, at the end of the day, my mom was about eating good food around magnificent company and, on occasion, experiencing new things. 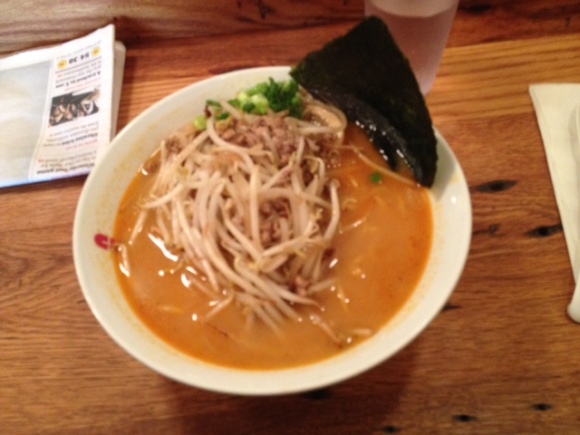 A few weeks ago when I was in DC, I had a quick lunch with a friend of mine after touring the NPR building. We decided on Daikaya, a restaurant serving ramen that has a good reputation and was between where I was visiting and where my friend was working. Given Daikaya’s rave reviews, I was ready to see how it stacked up not just to Toki Underground, the previous king of ramen in DC, but to the great ramen joints in Southern California and New York City.

Fortunately we arrived at Daikaya just before the DC lunch rush started crowding the restaurant. Within about 10 minutes we were seated in their modern bar-esque type seating arrangement. We were promptly served water and ordered relatively quickly. I got the spicy miso ramen with chashu and soft boiled egg.

After waiting for about 10-15 minutes, the bowls of ramen came to our table. The first sip of the soup was heavenly, with a perfect amount of spice and salt. As a person who usually eats Hakata style tonkotsu ramen, which can be a bit salty, I was pleasantly surprised with the lightness but also complexity of the spicy miso flavor. The ramen noodles were cooked just right, which was wonderful given that Toki Underground can have a tendency to overcook their noodles. The soft boiled eggs were also cooked just right with the flavors balancing the spice of the broth really well. The chashu was the only disappointment. It wasn’t bad, per se, but could have been sliced thicker as well as had juicier and fattier cuts of pork.

Overall, Daikaya definitely beat Toki Underground to take the title of “Best Ramen in DC” in my book. As for the comparison between Daikaya and ramen shops in LA or NYC? I feel Daikaya was comparable, but I probably need to eat more Sapporo style ramen shops in either city before I can really judge.

In the end, I think my mama would have agreed with my decision on good food and great times with friends. Given that Daikaya also has an Izakaya upstairs, it looks like I will have more opportunities in the future for friends and food, just as my mom would have wanted it.