Los Angeles. San Francisco. New York City. Those are the places most people think of as the cities to go to for good Asian food in America. Cleveland, Ohio, would likely not be on anyone’s mind. Despite its relatively bland and uninspiring reputation, I felt compelled to try the Asian food in the city during my brief time there last weekend to witness the marriage of two wonderful friends. This was reinforced when, much to my surprise, Cleveland had a couple restaurants that scored fairly well in the Dim Sum Rankings I compiled last year. Sadly, I didn’t get enough time to eat at all the restaurants I wanted to go to, but here are thoughts on the two that I did manage to squeeze in with my 36 hours in town.

On Thursday I arrived in Cleveland shortly before game 4 of the NBA finals. After I dropped my bag off at the place I was staying, I decided to wander and explore downtown Cleveland a little bit. Unbeknownst to me, the Quicken Loans Arena where the Cleveland Cavaliers play is right next to downtown, so nearly all the streets were packed and my cell phone data became non-existent. I panicked a little as I was essentially flying blind on where to eat, without access to Yelp, Chowhound, or the travel recommendations of my friends. So as I turned into the pedestrian mall of East 4th Street, I was anxious. However, I saw the sign for Saigon and vaguely remembered that it was on my friends’ travel recommendations for the wedding. I breathed a little easier and went in to grab a table.

I sat down and browsed the menu, which was a little smaller than the pan-Vietnamese menus I was used to. I did, however, notice that the menu had both southern and central Vietnamese dishes so I proceeded to ask the server what they thought was best. Given the recommendation, I order the Bún bò Huế and then some crispy spring rolls (or what most Americans would refer to as egg rolls). My thoughts on them below:

All in all, I was pleasantly surprised by Saigon. There are even Vietnamese restaurants in the Bay Area that would be negatively compared to this delightful place in the middle of downtown Cleveland. I can see why my friends like this place.

Given that I had no obligations for lunch on Friday, I decided to eat some dim sum. I chose Emperor’s Palace because it placed ever so slightly above the more popular Li Wah in my dim sum rankings and I only had one lunch meal in town. So the next morning, after I had laundered and pressed my clothes for the wedding later that day, I drove over to Emperor’s Palace in Cleveland’s old Chinatown.

Entering the restaurant I sat down at one of their many open tables. Normally the relative lack of people at the restaurant would worry people, but the few other tables occupied were of Chinese families and friends talking loudly in Cantonese, greatly relieving me. I browsed the menu and ordered the following:

All in all it was definitely better than many dim sum restaurants outside of the big 3 of LA, San Francisco, and NYC. After swinging by Li Wah right after just to check it out, I do wish I had gone there instead, though it’s great to know Cleveland residents are not left wanting, with two good choices for dim sum.

I just wished I had more time in Cleveland because I felt that 36 hours was definitely not enough time to even explore the Asian food options of the area, which showed tremendous signs of promise just from these two restaurants. I’d even argue that Cleveland has a better Asian food scene than Philadelphia, even though Philly has a still thriving Chinatown. I suppose it just means I have another excuse to do a Midwestern road trip, not only to see some friends, but to eat some great food.

If you go to many Chinatowns, especially those in American suburbs like the San Gabriel Valley or Houston, you will hear a preponderance of Mandarin being spoken. Much of this is due to immigration of Taiwanese in the past few decades combined with a newer wave of Mainland Chinese people in those areas. Because of this, the last bastion of Cantonese dominant Chinese enclaves is the first major American metropolitan area that people in Guangdong province settled in: the San Francisco Bay Area. Therefore, I thought the perfect place to start my blogging of Bay Area Asian food as a resident is an older Cantonese restaurant that has reinvented itself anew again.

Peony Seafood Restaurant sits at the second floor of the Pacific Renaissance Plaza, a mixed-use center built in 1993 at a time when Hong Kong developers poured money to build new, gleaming Chinese catering strip malls up and down California. In its previous incarnation starting in the 1990s, Peony was one of many Hong Kong style seafood palaces opening up serving dim sum on carts at lunch and upscale Cantonese food for dinner. However, by the early years of the decade the restaurant had become warn and stale, with a number of complaints on review sites like Yelp stating its mediocre food, high prices, iffy cleanliness, and dwindling clientele. The restaurant subsequently closed in 2013. 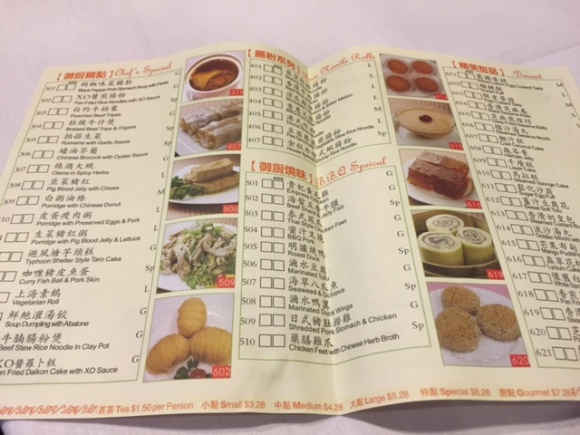 However, in 2014 it reopened again under new management. While the restaurant’s basic format didn’t change – it still served dim sum at lunch and seafood dishes for dinner – the presentation, menu, and service did. Gone were the carts of old, replaced by a dim sum checklist menu similar of more modern, higher quality places in Los Angeles, Vancouver, and Hong Kong. The restaurant received good reviews so I decided to give it a couple of tries when friends of mine were in town. The following were some of the dishes I got throughout my visits and my thoughts:

While it’s really hard to flag someone down for service here, the food is good and definitely better than its previous incarnation. The above average food does also come with above average prices, though, so be warned if you’re used to prices at older dim sum palaces that still use carts. And while I won’t say that Peony competes toe to toe with Hong Kong Lounge II as the best Dim Sum in the Bay Area, it currently shines over East Ocean in Alameda as the best dim sum I have had recently in the East Bay.