If I was skeptical that Thai food in Portland would be good, even with a world renown restaurant, then I certainly did not have high expectations for ramen in Portland. However, I am always up to try different types of Asian food wherever I travel so I ignored any reservations I had and dug right into my food adventures.

My first Portland ramen stop was Mirakutei, conveniently located a few blocks from the hotel I was staying. I went with my coworkers on a Monday afternoon who also wanted to grab lunch close by.

We sat down and looked at a very simple, one page lunch menu which had a few ramen options and a few bento box options. Most of us opted for the several ramen options that they had. I chose the tonkotsu ramen option, which came out fairly quickly. The broth was nice with a salty, rich pork stock that was filling but not too overpowering with fat. The noodles were good, if slightly more cooked than I liked. The pieces of pork were fabulous, however, with perfectly moist and tender meat and the eggs were perfectly soft boiled. At only $9.50, it is definitely a bargain lunch and well worth it. 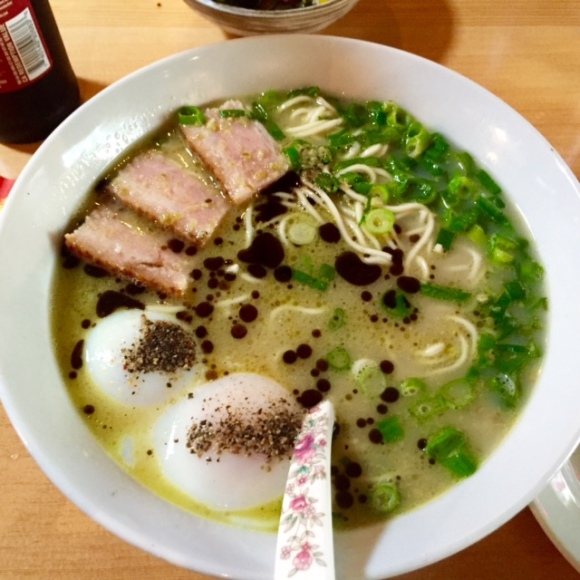 A few days later my friend and I were on our way to Salt and Straw from the International Test Rose Garden and decided that we needed to eat some dinner first. While Northwest Portland has plenty of decent dining options, we spotted Boxer Ramen and decided to go in.

Boxer Ramen is pretty casual with a few picnic like tables set inside with a really simple menu of about 10 items plus a few seasonal side items on a separate sheet of paper. We both decided to get different types of ramen and share the Greens and Sesame. The Greens and Sesame came first and was very refreshing. The cabbage lightly flavored the chard as well and there was just enough oyster sauce to get a hint of saltiness. Then the Tonkotsu Shio came to the table. I wish the broth could have used a little more fat, but the noodles were cooked perfectly. The pork tender, if a little chewy, but I liked that there were a few more pieces than usual. The only true disappoint of the dish were the 2 soft poached eggs I had, which were very runny and, dare I say, bordering on raw. Overall, however, I liked my bowl of ramen and still found it pretty good.

All in all, the ramen in Portland I had certainly surpassed my expectations. In fact, despite the little imperfections here and there, I thought the ramen was still better overall compared to ramen shops in the East Bay. It goes to show that while mid-sized cities that don’t have a relatively large Asian population may not have restaurants that rise to the level of Los Angeles or New York, they certainly can have Asian food that can be competitive and above any expectations. I certainly won’t be bashful in trying out more ramen and Thai spots in Portland when I’m back again.