When I was in the process of selecting a place to host my slightly belated birthday dinner this year I wanted a place that was: A. relatively new, but highly regarded; B. was something a little different than what most of my friends may have had before; and C. was relatively close to transit or fairly accessible by car for friends both in DC and the suburbs. Thamee fit the bill as a newer, well regarded place for Burmese food in a metro area that has few restaurants representing the cuisine (and most of those places have been underwhelming). So on a Sunday a month ago, five of my friends gathered with me to celebrate.

As we got seated and looked at the menu we all got some fantastic drinks, which included the non-alcoholic Butterfly Limeade which was just as delicious to drink as it was to look at. We quickly decided to do family style instead of the Thamee experience, so after restraining ourselves from ordering the whole menu, we got the following: 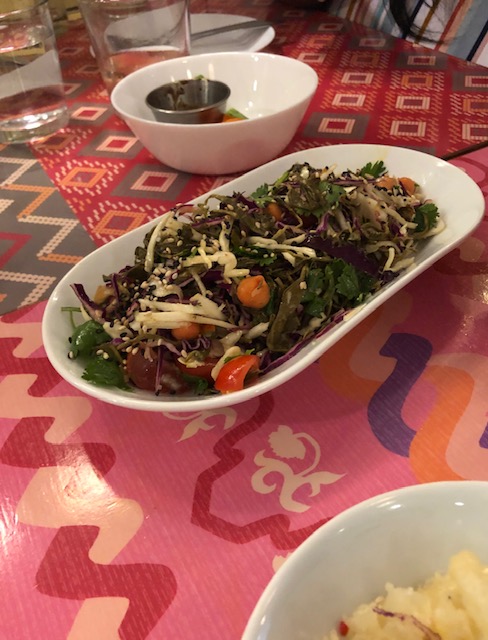 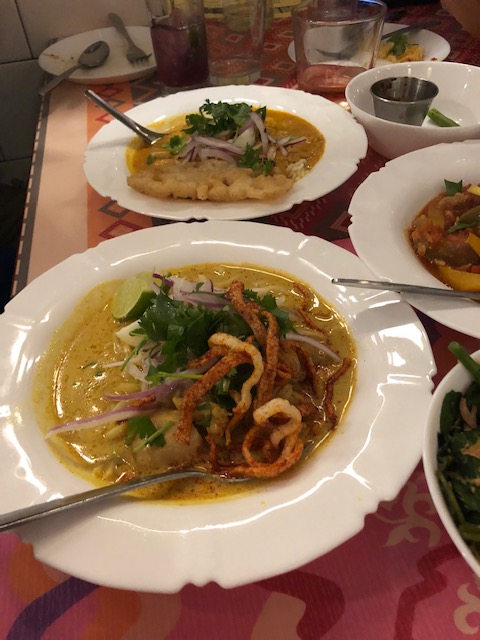 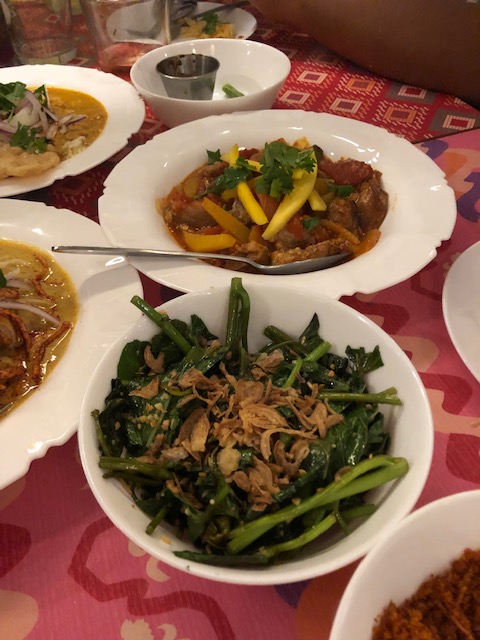 Pork and Pickled Mango and Garlic Greens at Thamee

As much as all the dishes above were amazing, sadly the portions were on the smaller side so we had to order additional items to properly fill our stomachs. We ordered additional Prawn & Tomato and Garlic Greens in addition to these two new dishes: 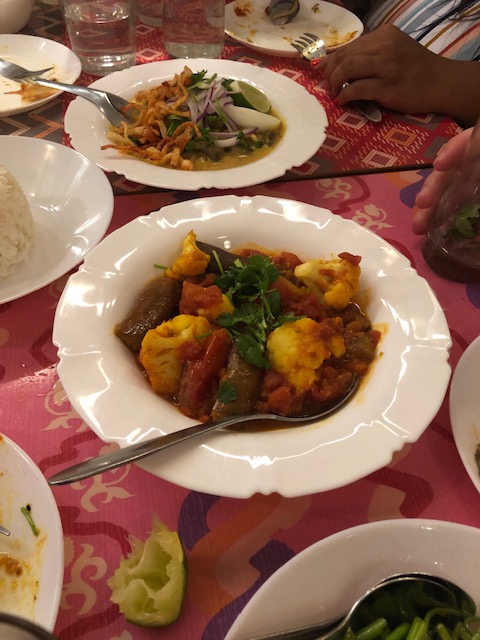 Ohno Khauk Swe (Vegetarian) and egglant and Cauliflower at Thamee

All in all I loved Thamee and I’m glad there’s a Burmese place in DC that does the cuisine such justice. Not only was it a great way to celebrate my birthday, it was great way to taste even more flavors of Burmese food I can’t find in the Bay Area.

The Bay Area has a plethora of Burmese food and it seems like nearly all Bay Area cities with a downtown strip have at least one Burmese restaurant. While many of them are tasty, truth be told I find some of them more “entry level” Burmese introducing the cuisine to American palates. I like Burma Superstar enough, but until now I never really felt the restaurants had quite the depth of flavor as some of the homecooked Burmese food of the family friends I grew up in church with.

But one restaurant had always intrigued me: Grocery Cafe. I had initially wanted to go to Grocery Cafe in their previous East Oakland location but never made it. However, more recently they moved to a location by Jack London Square so a couple weeks ago I took advantage of the opportunity by having dinner with my friends there to debrief Crazy Rich Asians.

The restaurant is a little cozy, but elegantly decorated and we sat at a table by the street facing window. We took a look at the menu and decided to eat family style and ordered the following: 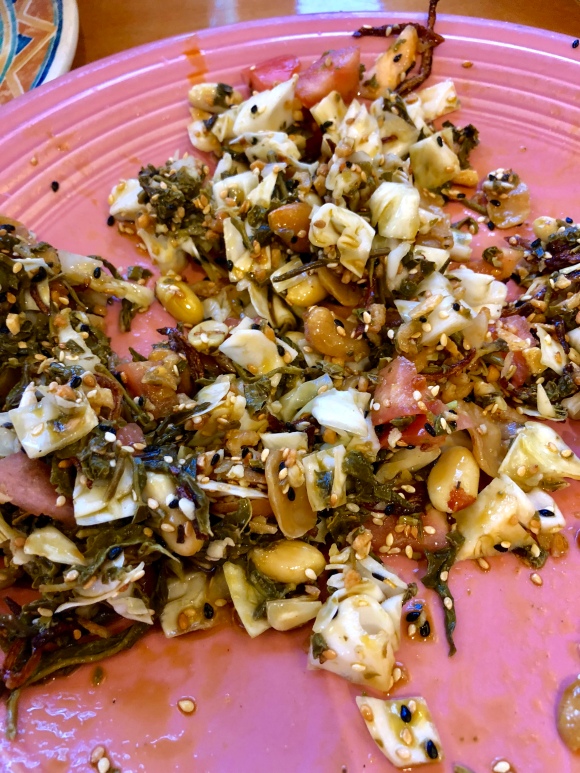 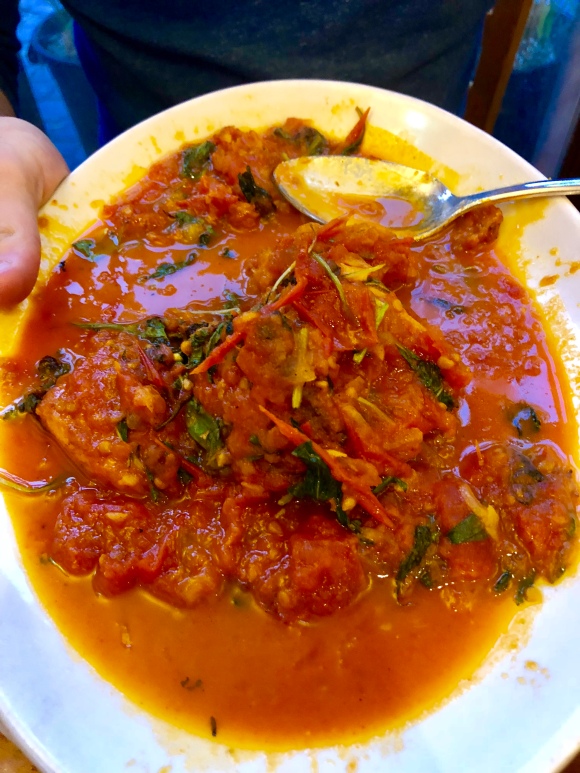 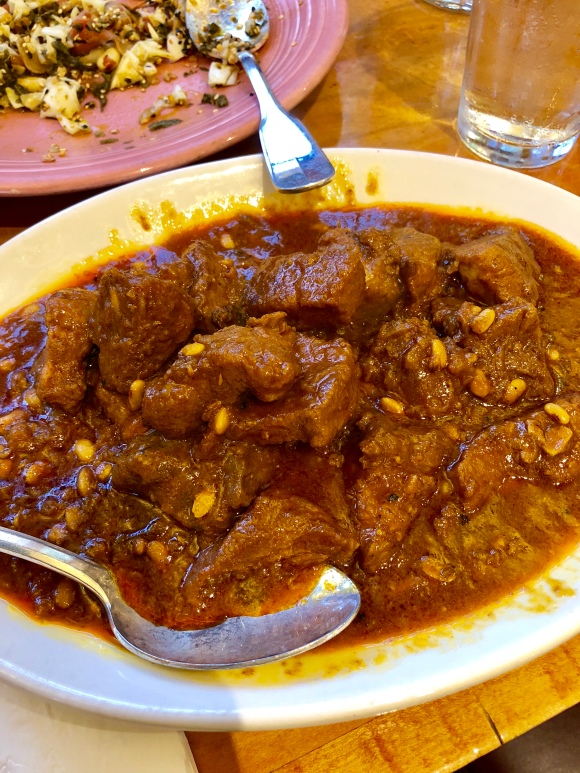 All in all, I loved Grocery Cafe and thought it was the best Burmese I have had in the Bay Area so far. Best of all, I don’t even have to wait in line as I would have to at the Burma Superstar within walking distance of my house. I would happily take a longer diversion to Grocery Cafe and would love to try their Ohno Khao Swe (Coconut Chicken Curry Noodle Soup) next time. And for my vegetarian friends, they have a Vegetarian Hinga Soup too!

In Part 4 of this #BARTable Asian food series finally heads to my hood, the town of Oakland. Continuing along the Richmond-Millbrae line this guide will take you through West Oakland, 12th Street/City Center, 19th Street, and MacArthur Stations.

To be honest, this is the first station we can skip. The two places in remote walking distance of this BART station that serve Asian food are 2 Chinese American takeout spots, neither that serve food that’s any good.

Downtown Oakland’s BART station is surrounded by Asian food, especially given its proximity to Oakland Chinatown. 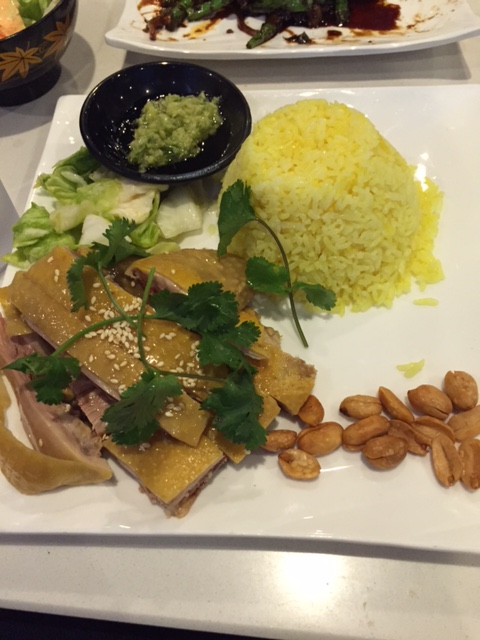 In Chinatown one can, of course, find a veritable cornucopia of Chinese food and only blocks away from the station. For Hong Kong style cafe food, I like heading to Shooting Star Cafe (especially good for desserts and Hong Kong style milk tea) and Baby Cafe. For dim sum you can head to Restaurant Peony for arguably some of the best dim sum in the East Bay or Tao Yuen Pastry for some classic Chinatown grab and go dim sum. Gum Kuo and neighboring C&M Bistro are go to spots for Cantonese roast meats, though Gum Kuo also has excellent noodle soups and rice noodle rolls. 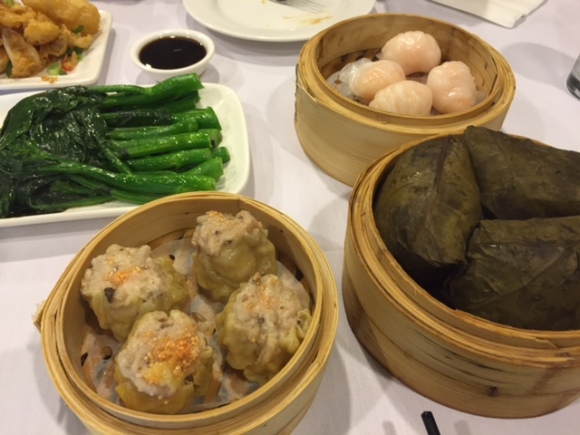 For non-Cantonese food in Chinatown, Spices 3 is the place to go for Sichuanese food and Shandong serves thick noodles and fabulous dumplings if you have a hankering for the heartier fare of Shandong province. And for one of the few Bay Area restaurants with Guilin style noodles, you can go to Classic Guilin Rice Noodles.

Chinatown, however, doesn’t just have Chinese food. For Cambodian food there is Battambang. Vietnamese food can be tastily sampled at one of my downtown favorites, Tay Ho, who’s signature item is the northern Vietnamese dish banh cuon. And for vegetarian Southeast Asian dishes, slightly out of Chinatown on 13th and Franklin is Golden Lotus.

The other side of Broadway in Old Oakland has a few Asian treasures as well. In Swan’s Market is the excellent AS B-Dama that serves great Japanese food. Le Cheval is a spot for decent Vietnamese food closer to the Oakland Convention Center.

Further up in Oakland in Uptown and the northern part of the downtown business district are also a number of Asian restaurants, though they aren’t quite as concentrated as Chinatown. Some of these places below can also be accessed by the 14th Street or Frank Ogawa Plaza exits of the 12th Street/City Center stations but it was easier to delineate each BART station’s offerings at 14th Street. 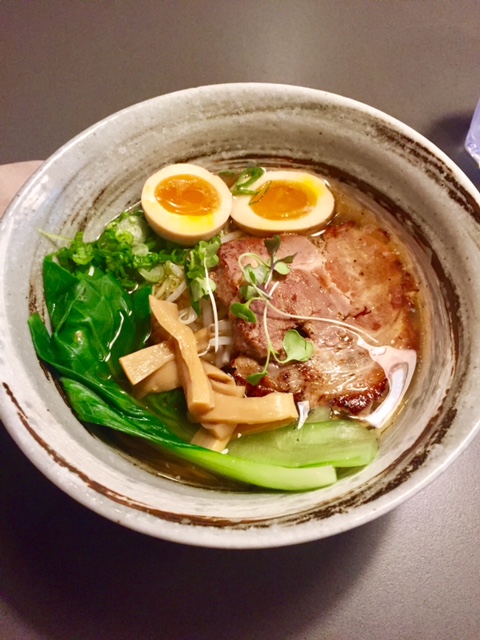 Near 14th and Broadway you have some of my favorites for a work lunch break. I go to Shiba Ramen‘s Oakland restaurant every time I want a comforting bowl of ramen. For Afghan food, there’s the newly expanded Kamdesh. On 15th Street there’s Ma Me House for a pared down menu of solid Vietnamese food and Ichiro Sushi for solid sushi and lunch specials that are filling, but reasonably priced.

Further north, closer to my current office are a few more Asian spots centered mostly around 17th Street. There’s Aburaya for some extremely tasty Japanese fried chicken. A couple doors down is Pho 84 where you can eat classic Southern Vietnamese dishes in slightly more refined settings. Around 22nd and Broadway is one of the few Taiwanese restaurants in the East Bay, Taiwan Bento, where you can eat some Beef Noodle Soup and Gua Bao. If you need some fruit tea or boba to wash down your lunch at any of these spots you can saunter down to Yokee on Franklin Street where you can get some delicious boba or very Instagramable fruit teas.

The final Richmond-Millbrae line station in Oakland is MacArthur, conveniently also the closest to my apartment. It’s also the closest station to Temescal, the neighborhood that contains Oakland’s largest concentration of Korean food in Oakland (yet interestingly enough Koreatown is just to the South).

For Korean food there are a number of options including Daol Tofu House and PyeongChang Tofu House for their namesake, and tasty, versions of soondubu. Hancook is the new restaurant in town that has Korean style hot pot. And further up Telegraph is Bowl’d, which serves a number of Korean dishes but best serves Bibimbap. Want Korean BBQ? I would venture a little further afield to Mosswood to Ohgane, a wonderful place with delicious BBQ that’s only $22 for All You Can Eat 10PM-2AM each day. 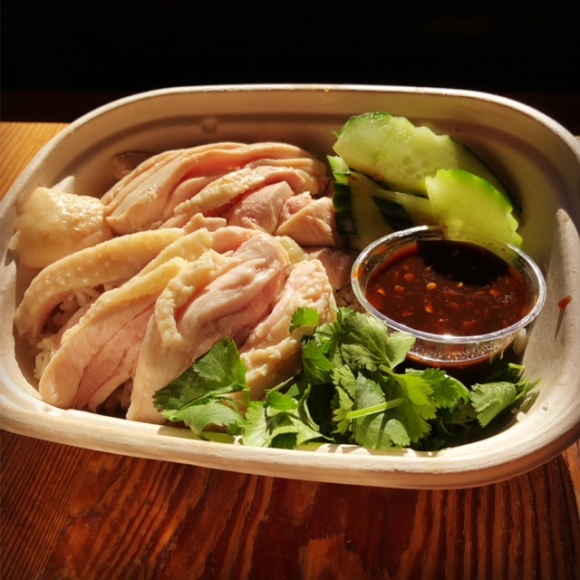 Temescal doesn’t only serve Korean food, however. Other Asian places include the oft-lauded Burma Superstar for Burmese. Down the street is Hawking Bird, the fast casual offshoot of James Syhabout’s Hawker Fare serving decent versions of khao man gai (Thai style chicken rice). Across the street from Hawking Bird and Burma Superstar is Marufuku Ramen which serves a pared down menu of excellent ramen.

So while San Francisco has plenty of Asian food, take a BART train across the Bay to Oakland where your taste buds can expand with all these excellent options. I dare say that some of these restaurants are better than anything San Francisco has to offer on their particular cuisine.

Surprisingly, Burmese cuisine probably was the Southeast Asian cuisine I’m second most familiar to, after Vietnamese. It just so happens that a couple families that attended my childhood church were Burmese and periodically some iconic Burmese dishes were cooked for church functions. I didn’t realize this until I was older, but I’m nonetheless grateful for my accidental introduction to Burmese food.

So considering the numerous raves about Burma Superstar by my friends and family in the Bay Area, I decided to go out to Oakland and have one of my birthday weekend meals there. I met up with a friend as well, who was also generous enough to give me a ride back to Oakland International Airport.

After about a short 15 minute wait, we both were seated. It probably took us about another 10-15 minutes to browse the menu of many exciting and interesting dishes, all of which I wanted to try. Unfortunately, we were a table of two, so we had to limit ourselves to 3 dishes max, or risk a large bill and a huge amount of leftovers. I did know I absolutely wanted a bowl of Mohinga (catfish chowder noodle soup) so I could compare it to the home cooked Mohinga I had as a child. We then decided to order the Lettuce Cups, Mint Chicken, and a side of Coconut Rice as well. Much to the shock of a friend I latter sat next to on my flight back home, I did not order their famous Tea Leaf Salad – something I will hopefully rectify on my next trip to the Bay. 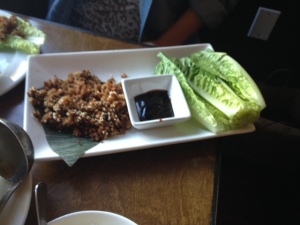 The food arrived another 15 minutes or so after we ordered. My thoughts below: 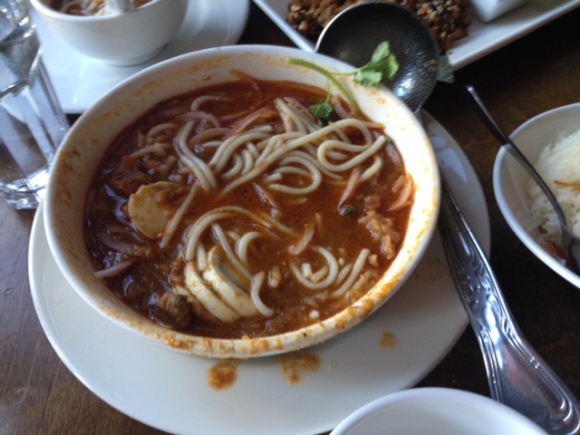 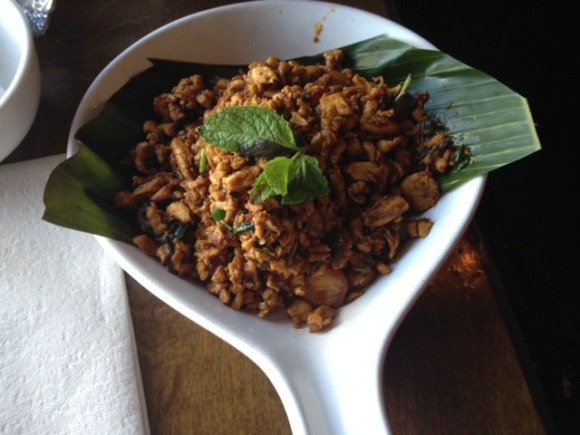 The service was okay. They did refill our glasses of water fairly consistently, but we did have to wait 10 minutes for them to bring out serving ware for our dishes. We definitely were able to manage, but it struck me as a little odd given the restaurant’s reputation.

All in all the food was cooked very well with complex, yet not too overwhelming, flavors I remember. The Mohinga, while being excellent in its own right, fell short of my admittedly lofty expectations. I’ll be honest, it probably was the fact that the noodles were cut and a little thick. But such small quibbles shouldn’t deter anyone from tasting excellent Burmese at Burma Superstar.