After dinner Sunday night my friends and I decided to go to a Hong Kong dessert place. We stumbled on the place by pure accident, but it gave me a chance to eat one of my favorite dessert items for my birthday: an egg waffle (or 鷄蛋仔 as it’s called in Cantonese and eggette as an alternative in English).

Egg waffles, if you don’t know, are very popular dessert/snack items sold on street stalls throughout Hong Kong. While the origins of this snack item is little known, the modern day form is an egg rich batter that goes into a waffle like griddle with egg-like pockets where puffs of chewy dough form. An ideal egg waffle is crispy and crunchy on the outside while also being soft, slightly sweet, and a little chewy inside the puffs. These can be enjoyed throughout the day, but usually I have them either as a mid-Afternoon snack or a post-dinner dessert. 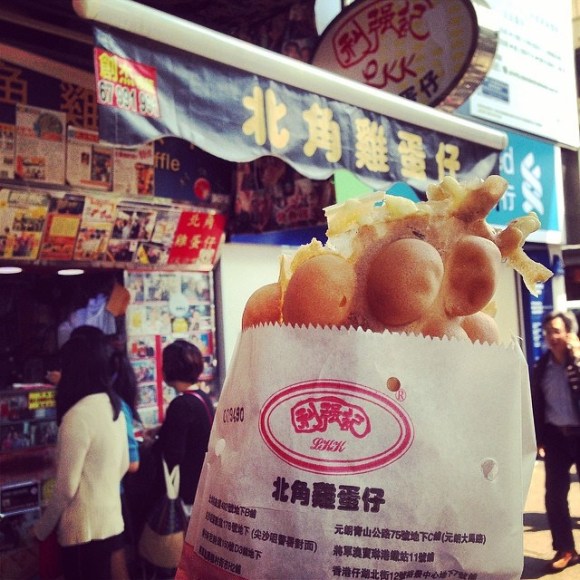 The best place I have had an egg waffle is, of course, in Hong Kong. There is a famous stall in the North Point neighborhood called LKK (利強記北角雞蛋仔 in Chinese) on 492 Kings Road, at the corner of Kam Hong Street. On Kings Road it’s hard to spot, but once you turn the corner onto Kam Hong St. you will see an unmistakable line for these egg waffles. The place is an institution, with a number of photos of TVB stars, like Nancy Sit, eating egg waffles at the place plastering the wall of the stall. Yet, it’s location in a fairly working class residential neighborhood means it is never really mentioned in English or Mainland Chinese travel press, given the place a very local feel. They even have a couple of other locations in Hong Kong, testifying to its popularity. The egg waffles, of course, are super great as well with pretty much perfect texture and at a bargain of $2 USD for one.

However, you definitely don’t need to travel to Hong Kong to eat an egg waffle. If you live or visit a city with a large population of immigrants who were born and raised in Hong Kong, like Los Angeles and San Francisco, you can get a bite of one too.

It should be no surprise that the Bay Area has plenty of food vendors and restaurants that serve egg waffles. After all, the Bay Area has the largest number of residents that are from Hong Kong according to the census bureau, and it’s the only major metropolitan area with multiple Chinatowns where Cantonese is the lingua franca.

If you live in the East Bay (around Oakland and Berkeley), like I do, there are a number of options for one to get a taste of an egg waffle. Probably my favorite is the aptly named Hong Kong Snack House in the Pacific East Mall. The tiny store is very reminiscent of a Hong Kong street stall and serve nicely cooked, if slightly underdone, egg waffles. In Oakland Chinatown there are a number of options. If you are on the go, there is the Quickly on 10th Street that can satisfy your on the go craving for both boba and egg waffles. However, if you rather have it at a sit down restaurant, you can go to one of several Hong Kong style cafes/cha chaan tengs like the more upscale Shooting Star Cafe or the more bare bones Yummy Guide. 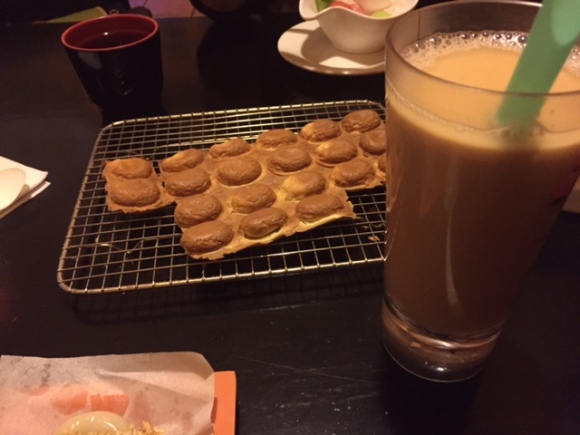 The city and the Peninsula are not left wanting either. Just the other day my friends and I went to Creations Dessert House in the Richmond where they served perfectly crispy, if oddly misshapen egg waffles. There is also the 4 location chain called Eggettes where egg waffles are their raison d’être. Not to be left out is the well reviewed Kowlooon Tong Dessert Cafe. And if you want a feel of being on a crowded street in Hong Kong, there is Dessert Republic in downtown San Mateo. 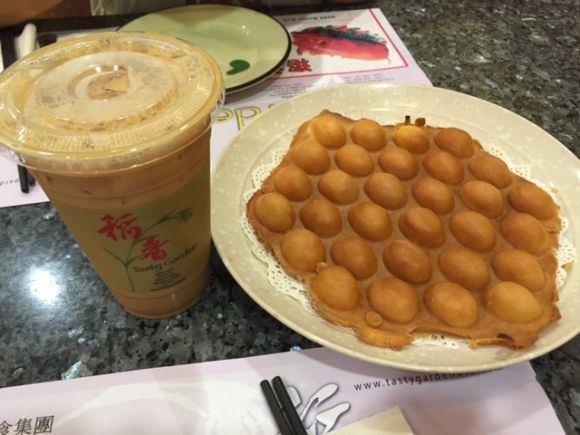 雞蛋仔 at Tasty Garden in Westminster

To eat an egg waffle in Los Angeles, one will have to do what they have to do to eat any other amazing authentic Chinese food item: drive to the San Gabriel Valley. Once you are in the SGV, however, the number of options are numerous. A vast number of Hong Kong style cafes/cha chaan tengs have them, so you can get your fill at places like Tasty Garden in Alhambra and Monterey Park, Cafe Spot in Alhambra, and Tasty Station in Rowland Heights. Don’t need a meal and just prefer desserts or snacks? Tea and dessert places like Puffect in Walnut and Fresh Roast in Alhambra.

Outside of the Bay Area and Los Angeles, egg waffles are a little harder to find in the United States. While there was an “egg cake lady” named Cecilia Tam that sold bits of egg waffles in New York City during the 80s and 90s, there is little presence of the egg waffles now. You still, however, can get them in Boston at a little stall in Chinatown. In San Diego, one can find them at E + Drink, which is interesting given that the place is mostly Taiwanese (albeit Hong Kong style dessert places in the Bay Area often serve boba instead of Hong Kong style milk tea).

But no matter where I have an egg waffle, eating one just brings me a sense of warmth and comfort. It’s the ultimate snack, a perfect way to finish a busy day of work or a nice bonus to a birthday celebration with friends. In fact, I wish I was eating one right now.