The first stop on my way from DC to Denver was the famous old steel town of Pittsburgh. I didn’t know what to expect from Pittsburgh in terms of Asian food, but I suspected it might be reasonably good and authentic given that some Asians had moved there with the Pittsburgh resurgence in high tech and biotech. I consulted renown Chinese food expert David Chan on his suggestions for good Chinese food in the area. He suggested I try Everyday Noodles, a restaurant he has wanted try but has not been to yet.

After I checked into my hotel I decided to venture to the Squirrel Hill neighborhood where Everyday Noodles was located. As I drove down Forbes Avenue in Squirrel Hill I realized there was an abundance of Asian restaurants on the street, including several ramen shops and Taiwanese style restaurants. I was hopeful that this experience would be great given the competition in the area seemed high.

I entered the restaurant and was warmly greeted and seated. As I sat down I noticed how bright and modern the space is. The restaurant certainly embraces the open kitchen concept that has become trendy over the past decade. However, one flaw of this restaurant design is the heat that is trapped in the seating area. The combination of poor air conditioning circulation and hot air from the kitchen created a fairly warm interior that was not very pleasant after walking in hot and sticky weather.

All that aside, while I was looking at the menu after being seated, I was pleasantly delighted at the authenticity of the menu. It had all the hallmarks of a Taiwanese restaurant in California. Since Mr. Chan recommended that I try new, interesting menu items, I declined eating the beef noodle soup and instead order the Taiwanese Style Dan Tsu Noodle Soup and an appetizer plate of marinated tofu skin and wood ears. 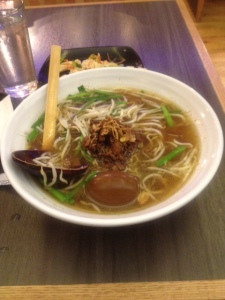 The tofu skin and wood ears initially were very tasty. However, I started to get sick of them after eating about half the plate. I don’t know exactly what it was, but I guess too much of the light vinegar marinade really did not agree with my palate. The Dan Tsu noodles were definitely better. While I have never had it before, the soup was a beef broth filled with chives filled with your choice of wide or thin wheat noodles and topped off with braised minced beef and a tea smoked egg. I liked the flavor of the broth, though it was a bit oily, the noodles were cooked well, and the minced beef definitely had a nice flavor. However, I felt like there was too little minced beef for such a large noodle soup bowl.

The service after I ordered was a bit slow and the waitress only offered to refill my water near the end of the meal. It also took a bit to get my check and process the credit card, which really should not have been that long given how close it was to closing time.

All in all, it certainly wasn’t a bad experience, but nothing to write home about. Given the competition in the area I think I will have to try other places before I get a sense of how decent the Chinese food is in Pittsburgh.